When fishermen turn to” bamboo talk” it is common the conversation lean to subjects of almost enigmatic nature. Why is that?
Maybe a long tradition filled with famous characters is a good ground to speculation … anyhow, to the initiated most of this stuff is like “splitting hairs“.

There´s usually some “theoretical substance“ (do you get me?!) somewhere, but the practical outcome from these theories are seldom worth the effort. At most you get a few % more effect; translated to casting length, a few % means 2-3 feet more distance …

By heat treating (tempering) you drive out moisture and so strengthen the bamboo, mostly doing the same thing as a longtime seasoning. A yellow culm is always cured enough to be ready for heat tempering. 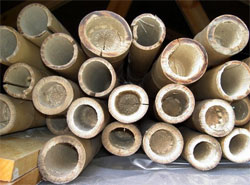 Both methods do the same thing (see above). Flame tempering leaves the nodes yellow (which some people like) and oven tempering doesn’t, that´s all. I have always flame tempered my rods, but that is because of convenience (avoiding the bulk of a huge space taking oven) and my way of rod making; I have adapted my methods to flame tempering .If the maker can master flame tempering You will see no darker or lighter spots except for at the nodes, so there´s no need for an oven for an even shade.

What part does the heat treating play?

Heat treating strengthens the bamboo to a certain degree and is therefore desirable. But it doesn’t make a rod revolutionary more powerful like many people think , say , You could cast a much heavier line or  achieve  substantially larger distance … heat treating can´t do that .Though , the tempering is necessary to avoid sloppy rods and , above all , make the rod resistant to “sets” . Foremost, the power lies in the taper, heat treating can do a few %, not more. 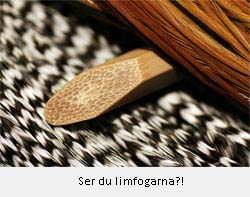 The need for thick layers of Power Fibres

The power fibers are what gives a rod its strength. The layers of these can be seen if you look at the end of a culm; they are round brown micro areas surrounded by a white ring of less pithy material. The thickness and density of this layer vary from culm to culm; also, they are thicker at the lower end. It is common belief that the thickness of this layer determines the power of the finished rod, and maybe you have seen pictures of bamboo rod makers examining a bamboo culm carefully from the butt end. Now, that thickness isn’t at all as critical as you could expect from such photos. What the rod maker does, besides examining there is a reasonable amount of power fibers, is to check out how straight a culm is; a straight culm is more convenient to work.
A rod ´s power is related to the taper, nothing else. Remember bamboo itself is a reed and, opposite to trees, rely on its outside strength only .On the inside bamboo is nothing but air – the weakest “material” of all… 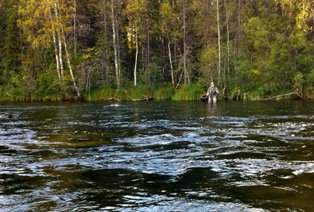 Monday, September 12, 2011, I got my biggest grayling.
It measured 62 cm and expertise judged it to weigh 2.2 kg.
The fish took on "AnderbUrg no. 16" (suPAR-pupa) and the rod was 9ft with my new, faster para-action, but the great hero was the Maruto barbless hook that is not straightened in the slightest, despite the high pressures it is subjected to.

The alert photographer was Johan Stenborg.
Thank you for being alert and perpetuated my big moment! 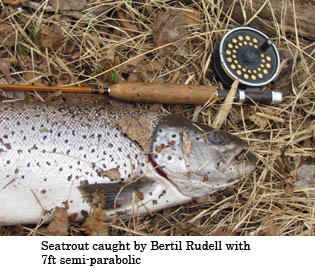 If you own a split bamboo rod, use it! It is not a showpiece meant to be hanging on a wall. Too many think it will break easily.
The truth is that it takes as much punch as any other material, in fact a lot more. Except for hollow built bamboos, it also lacks a thin wall that can give in from external force. 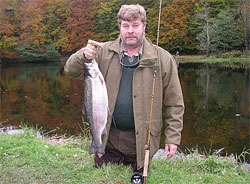 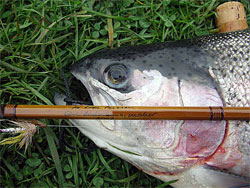 Roger Persson , Hässleholm , with a Rainbow Trout caught with a t 7´9" Semi-Parabolic # 4-5

Yes, compared to a graphite rod it is heavy. So what? Anybody can handle a few ounces more, and the forgiveness the weight produces will make it more comfortable than you think.
But there´s a limit; a single-handed  9-footer and up is tiring to most fishermen, I believe. 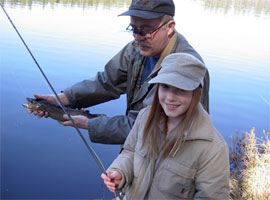 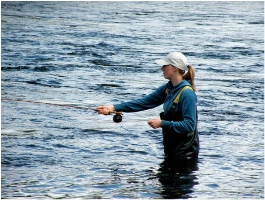