If you own a graphite rod to your liking, you don´t need a split bamboo; many good graphite rods are around. But the makers are often large companies who must produce large series. These series are
meant to attract many people. And they meet a stiff competition from other companies. People nowadays are less inclined to be subdued by other arguments than real facts. In order to win the market rod companies can fight with two weapons: Strength and weight. 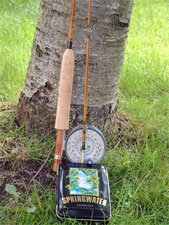 All arguments point in the same direction, a point far beyond what the fisherman previously has been able to achieve, the "ultimate long" cast ...

This battle influences the action philosophy, which explains the trend towards actions more or less picked up from the casting pond.

But you should choose your rod for other reasons than a few physical facts; this rod will be your fishing buddy, you will be a team, you must get along ...

Graphite as a material is´nt restricted to stiff, tippy rods. It could quite well match the bamboo in many ways. Many times I have wondered what had happened if the graphite rod makers had abandoned the "weight doctrine" and made the rods homogeneous...What good and powerful deep action rods could be had!
The weight had increased, but is that a bad thing really? Why do so many find split bamboos more comfortable to use? A Norwegian friend of mine uses 14-15 ft bamboos for heavy salmon fishing because he´d be tired out with a light but faster graphite; he just waggle his split bamboo a few times and the line is out there instead of putting lots of effort to get a graphite rod work properly.
Weight is a part of the cast; it slows down the rod so it can recover over a longer period of time = exert an influence on the line over a longer period of time. This "long impact" takes over much of the casters work. And it allows the rod to brush out most of the timing faults, making line correction easier; it is
"forgiving". 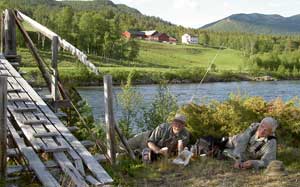 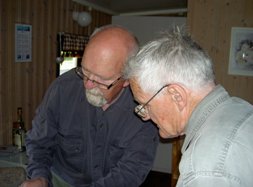 Bernt och Atle - two of my fishing buddies for many years

If you look at a given section of equally powerful rods  in GLASS (black ring), BAMBOO (red hexagon) and GRAPHITE (blue ring) you will immediately notice that the glass-rod is considerably thicker.The difference between bamboo and graphite, though, is slight. This has to do with the strength of the material, of course. The rod which slices the air most easily is naturally the thinnest, i.e. graphite, with the bamboo rod close behind.

The glass rod meets a much heavier air resistance, to such a degree the rod gives an indistinct feeling as it must be driven harder in the wind than more powerful materials.

The bamboo rod though, solid and heavier than graphite, will penetrate the air / wind with less effort than graphite (see above in a previous chapter).

Anders Ekstorp, the late rod maker of Sweden, used to say a rod should “whisper, not whistle“. He meant the whistlening sound of a fast driven rod revealed a less clever taper design, a taper that leaved the casting effort to be done mostly by the caster.
The same goes for a material which needs a heavy impact to respond.